It may be frigid outside, but plenty of Metro Detroiters are still getting out on their local trails frequently. What they may not know is that some trails stretch all the way across the state.

Michigan has five Great Lake to Lake Trails that reach from one Great Lake to another. Route 1 connects Lake Michigan at South Haven to Lake Huron at Port Huron. Part of this cross-state trail goes right through Metro Detroit, along the former Michigan Air Line and Grand Trunk railroad lines: From west to east, it includes the Huron Valley Trail, the soon-to-be-finished Michigan Air Line Trail, the West Bloomfield Trail, the Clinton River Trail, and the Macomb Orchard Trail. 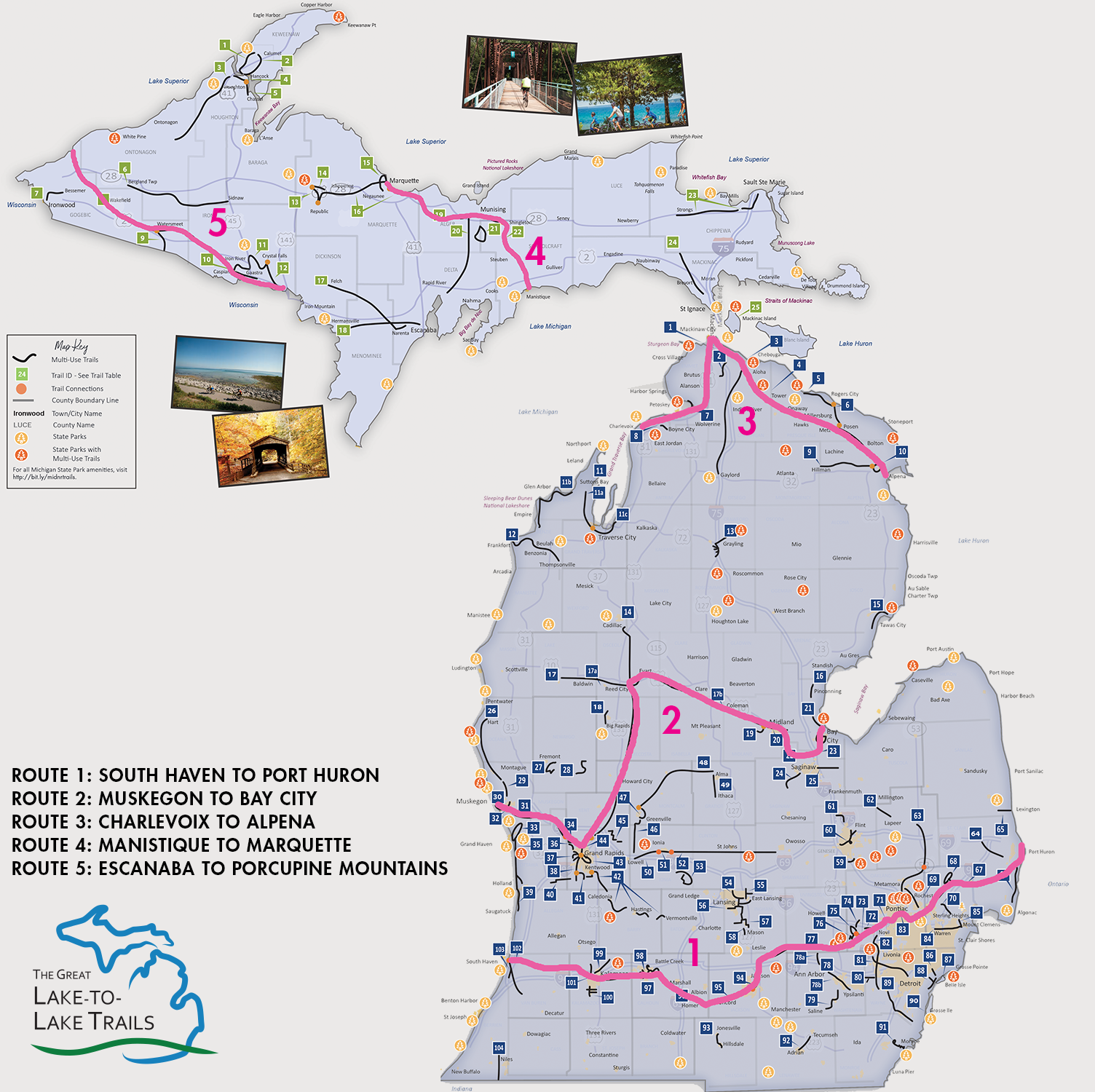 The Great Lake to Lake Trail is intended to be a “destination trail”—“one that people travel from around the state and the country to explore,” says Fred Phillips, with Friends of the Clinton River Trail. Through chatting with people, “we find there are already people traveling cross-country and following the Clinton River Trail and other Great Lake to Lake Trails as part of their journey,” he says.

In September, a group of about 50 cyclists participated in the trail’s inaugural ride, taking 7 days to ride from South Haven to Port Huron, exploring the scenery and the cities and towns along the way. The ride let communities along the trail see the potential of bringing in more riders, walkers, and runners, says Bob Wilson, executive director of the Michigan Trails and Greenways Alliance.

The Great Lake to Lake Trail “opens up all sorts of potential for new homeowners, small businesses related to trail use, restaurants, and lodging facilities,” Wilson says. “You can learn about history on the trails,” including Native American history and how trails have been used for commerce and transportation, he says.

A trail also “links people within a community and links communities to one another,” Wilson says. Sometimes people don’t talk to their neighbors across the fence line, but when you get on a trail, it’s a more welcoming environment, and people end up making new friends, he says.

Here’s a rundown of the trails that make up the Metro Detroit section of the Great Lake to Lake Trails Line 1.

On the west side of Metro Detroit, the Huron Valley Trail is a paved trail that stretches about 12 miles from South Lyon to Wixom, part of it running along Lyon Oaks County Park. An extension goes to Island Lake State Recreation Area, where it connects to the Kensington Metropark trail system.

Until recently, the missing link in Metro Detroit’s portion of the Great Lake to Lake Trail was the Michigan Air Line Trail, which connects the 6 miles between the Huron Valley Trail and the West Bloomfield Trail. The trail is paved and will be officially open for use around the end of December, with an official dedication this spring, probably on April 18 to coincide with the Rails-to-Trails Conservancy’s Opening Day for Trails, which kicks off the spring trail season. The recently finished M-5 Bridge will also be dedicated then.

“It’s going to help people get out more and be more active,” says John Hensler, trail manager. Because people may be unaware that the trail is part of a larger trail system, the Air Line Trail will have mile markers every half mile that display cardinal directions as well as the name of the trail and the Great Lake to Lake Trail. And at entrances to the trail, “we’re going have these ‘welcome to the trail’ signs with a QR code that you can scan, and that will take you to an online trail map and other information about the trail,” he says.

We still have an “overall education process to let people know the trail is here, and it’s part of a larger country network and a larger state network,” he says. He noted that the trail also connects to the M-5 Metro Trail, which runs south all the way to Lake Erie.

The new trail will allow people to get from place to place without a car, Hensler noted. “If you want to get to the ice cream parlor downtown in Wixom, you can just ride your bike to it now—you don’t have to drive.”

The trail goes through some wetlands and parks. “It’s a little more restorative to the spirit,” Hensler says. “Rather than just going along a sidewalk where there’s a lot of car traffic and noise, you can actually get out on the trail, and at several stretches in our area, it’s really nice and quiet and peaceful.”

Where the new Air Line Trail ends, the West Bloomfield Trail picks up, going almost 7 miles through West Bloomfield, Orchard Lake, Keego Harbor, and Sylvan Lake. The trail is important the community, says West Bloomfield Parks Superintendent Joe Ketchum. “I’ve had numerous people tell me the reason they moved into West Bloomfield was the trail. They love walking it, they love riding their bikes on it,” he says.

When Ketchum joined the West Bloomfield Parks 28 years ago, “they had just pulled the railroad tracks,” he says, and people used to dump old cars and other junk along with it. They cleaned it up, and now it’s a great asset that contributes to residents’ quality of life—and might attract new residents, he says.

The trail also ties into the West Bloomfield Woods Nature Preserve. “It leads people to get out to not only discover the woods and nature—it also connects neighborhoods to neighborhoods,” Ketchum says.

Trail use has increased over the years, and Ketchum expects to that increase to continue—especially for cyclists—as people start using the Michigan Air Line Trail.

The Clinton River Trail runs 16 miles across Oakland County, from Sylvan Lake to Rochester. It also connects with the Paint Creek Trail, which branches off to the north. “In 2019, the Clinton River Trail celebrated its 15th anniversary by offering a variety of events in all five of the member communities,” says Kristen Wiltfang, principal planner with Oakland County’s Economic Development & Community Affairs. She noted that the trail is at the crossroads of the Great Lake to Lake Trail and the Iron Belle Trail Biking Route, which extends from Belle Isle to Ironwood.

Benefits of the Clinton River Trail include enhanced quality of life, community health, economic development, and a legacy for future generations, Phillips says. “In many areas, the Clinton River Trail is sufficiently insulated from normal urban life to provide a natural environment unlike walking or riding down a neighborhood street. There is an abundance of wildlife to observe,” he says.

“We are very fortunate to have direct connections to local businesses and restaurants in downtown Rochester, Pontiac, Auburn Hills and Sylvan Lake,” Wiltfang noted. “There are also several access points to the Clinton River where residents and visitors can enjoy fishing and paddle sports.”

“Several new and pending developments have chosen to locate ‘trail-side’ because they realize the attraction that trails bring,” Phillips says.

The longest of the Metro Detroit trails that fit into the Great Lake to Lake Trail is Macomb Orchard Trail, which stretches 24 miles from Shelby Township, going east to the City of Richmond.

Metro Detroiters have plenty of trail options, including many other trails not part of the Great Lake to Lake Trails. Wilson says that when you have great trails in your own backyard, “there’s really no reason to venture outside of those areas unless you know about these unique experiences on destination trails,” which offer a whole different experience.

Amtrak’s route across the state parallels a large portion of Route 1, and it accommodates bike riders, Wilson pointed out. So you can leave your car at one spot, ride a length of the trail, and then take the train back to your car, he says.

Some areas of the trail also lend themselves well to a bike-hike-paddle experience, Wilson says. “With all the water resources in Michigan, there’s incredible potential to do a multimedia trail experience.”

After the Air Line Trail’s dedication this spring, its first official bike ride will be in June, through Motor City Brew Tours. The ride will start and end at Drafting Table Brewing Company in Wixom, and it will go the length of the Air Line Trail plus the West Bloomfield Trail.

Maps of many trails in the area are available from Michigan Trails and the Rails-to-Trails Conservancy’s TrailLink.